Another strange autumn heads towards winter 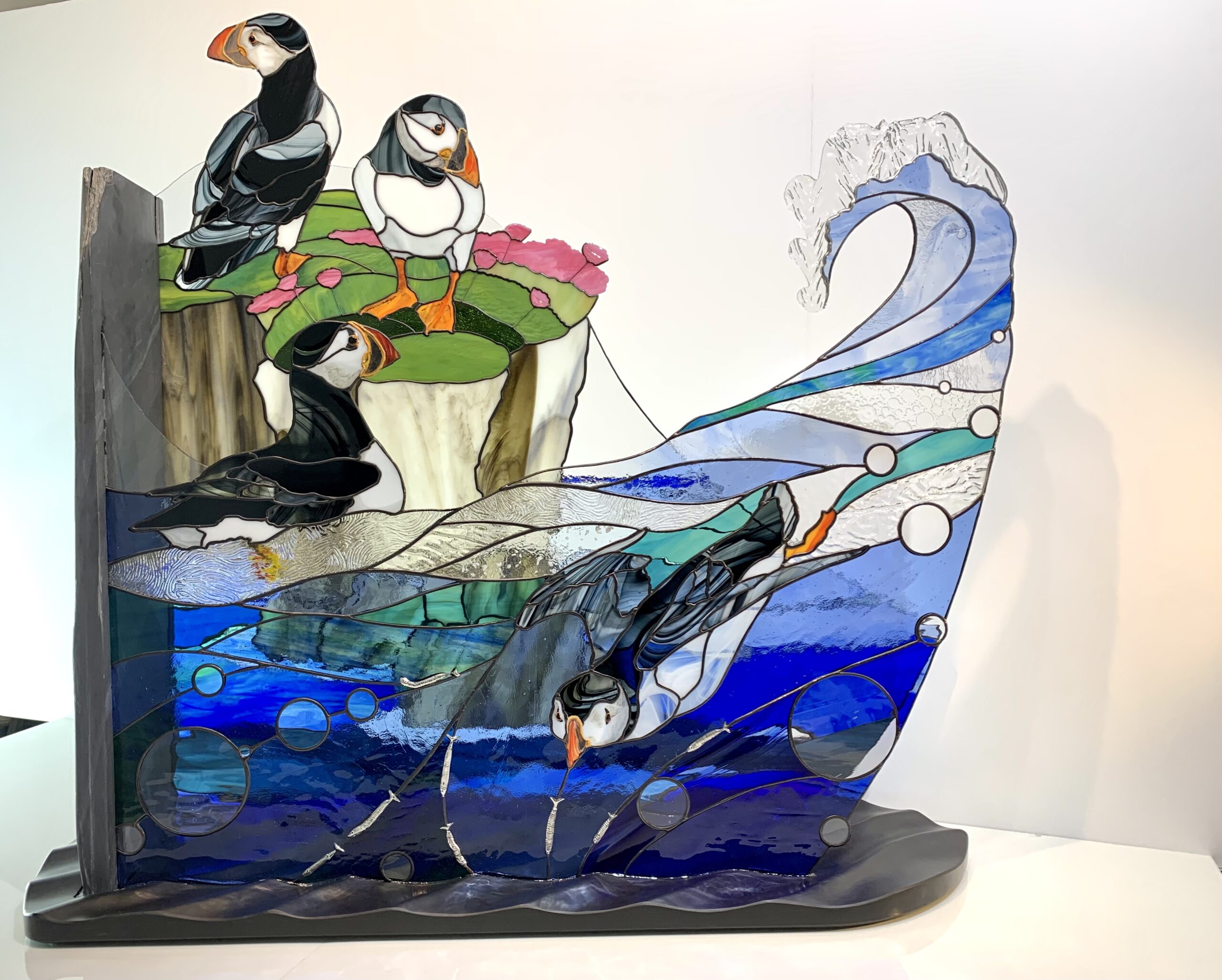 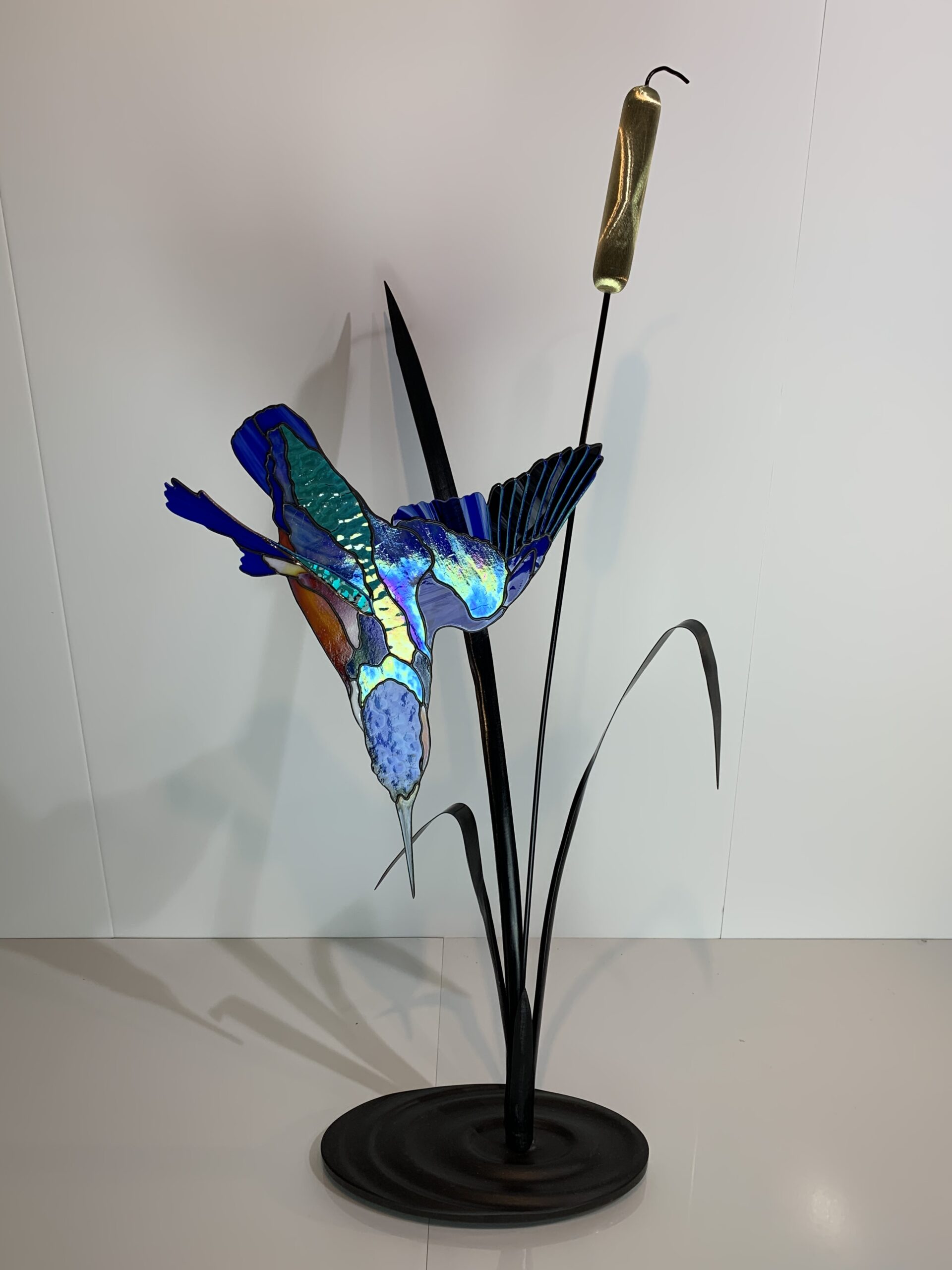 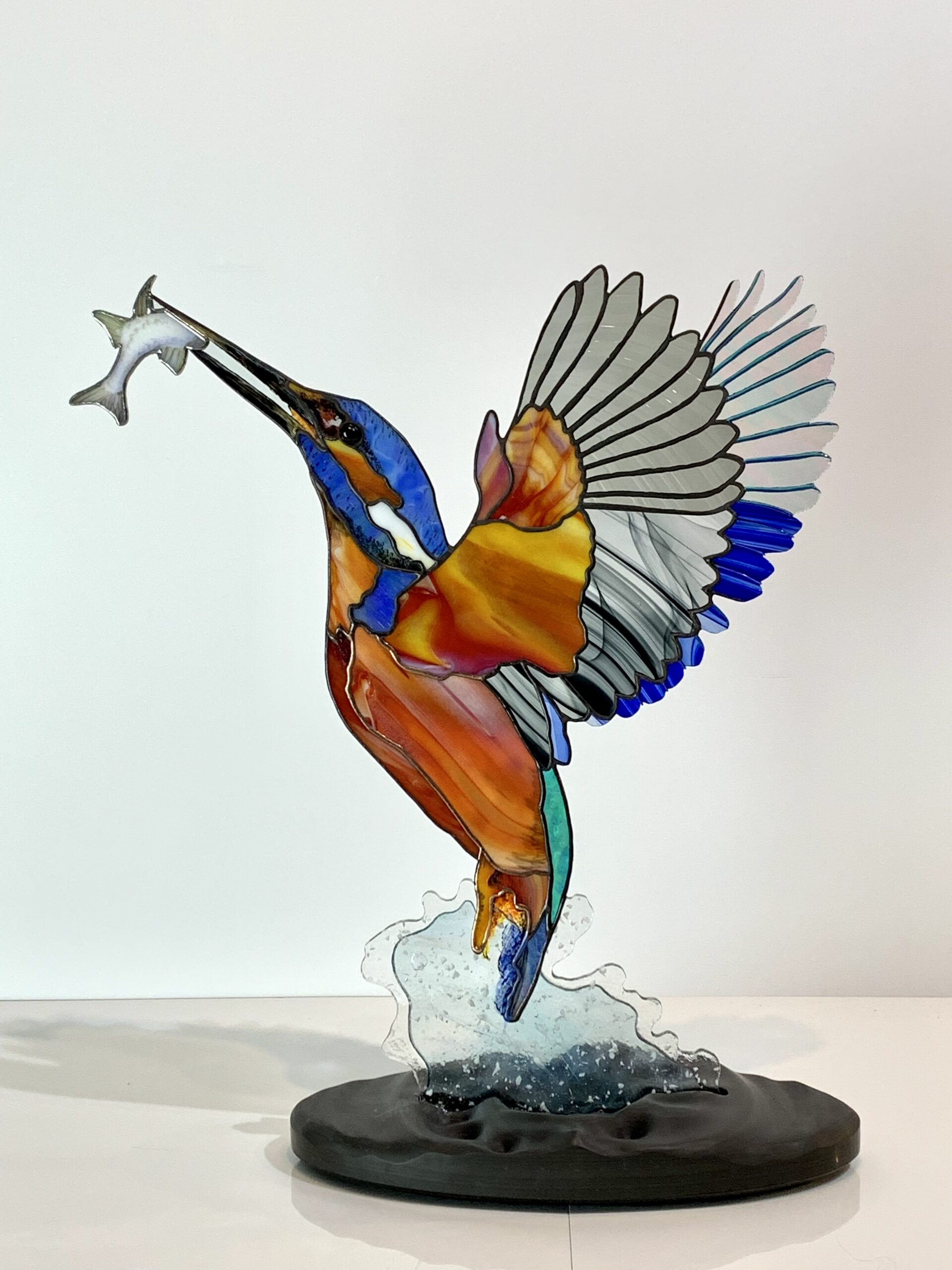 Breaking the rules is becoming a habit.

What do you do if your chosen medium is considered a ‘craft’ (something of a derogatory term in the fine art world) but, more controversially, will not fit the definitions of sculpture (being 3mm thick and refusing to stand up on its own) nor painting (I paint, but mostly use the glass) nor any of the other ‘wall-art’ categories? In my case, you keep playing with ideas, collaborate with other media, and go right ahead pushing boundaries and making people uncomfortable in their assumptions.

Last year’s Guillemot piece fell into yet another art category – ‘decorative wares’ – and while I don’t feel that thought holds much water (y’see what I did there?) I have little choice but to accept the decision of the panel. So, in all that thinking time I have while foiling bits of glass, I thought about an alternative way of using layered panels in a way that definitely won’t hold water. And, again, stretches even MY definition of what stained glass is all about. But what to make? Seabirds, again, are the obvious choice – since the auk family are really ‘swimming birds’ rather than ‘flying birds’ and their element lends itself to panel work. But what? What did I want to say?

The painful inspiration finally came from several difficult news items and my own experience of working on seabird island monitoring, and re-reading Kierkegaard’s ‘Either/Or’. One of his aphorisms – theatregoers ignoring a warning of ‘fire’ because the speaker is dressed as a clown – has always struck me deeply, and it came together suddenly into  an inspiration so strong I finally *had* to make Puffins.

“A fire broke out backstage in a theatre. The clown came out to warn the public; they thought it was a joke and applauded. He repeated it; the acclaim was even greater. I think that’s just how the world will come to an end: to general applause from wits who believe it’s a joke.”

Everyone loves Puffins. I swore never to make Puffins; because they are anthropomorphised and adored and laughed at and loved and trivialised and misunderstood. But for the last few years, I have seen increasing disturbance events around breeding seabird islands. Kayaks. RIBs. Fishing boats. I’ve seen broken juvenile birds desperately trying to get back to the cliffs, from scattered rafts in the roaring wakes of jetskis. I’ve seen Guillemots crashing off their cliffs as a boat noses too close below their feet, a tidal wave of panic and falling eggs. And I know that these birds are also struggling with climate and storms, sea temperature change, overfishing, plastics, litter…

Our seabirds are shouting in the theatre, and so are scientists and conservationists and activists, but it feels as if most of the world, most of the time, is too busy loving and laughing at Puffins to listen. Are they Kierkegaard’s clowns, or am I?

The ‘Clowns’ was accepted (to my very great pleasure) although not displayed particularly well in the gallery, being at knee height and in a corner so the translucency and movement between the two panels really didn’t show. But, you can’t have everything. Of the other two pieces submitted – celebrations of the fire and water glory that makes Kingfishers such a flash of joy when you see them – one (‘Diving’) was selected and the other rejected. I can’t tell you why: both cross boundaries between flat glass and 3D sculpture in using carved bases; both have considerable illusion of form in them; both make the most of light and colour and iridescence. But I loved making them, and still more have loved hearing from people who love them as much as I do.

I will be on the lookout for other opportunities to exhibit the ‘Clowns’: let me know if you have an idea for me. In the interim I will go on enjoying the morning sun shining through that rising blue ocean wave…