Picking myself up again

Three pieces submitted, but nothing selected. Reflections on rejection. 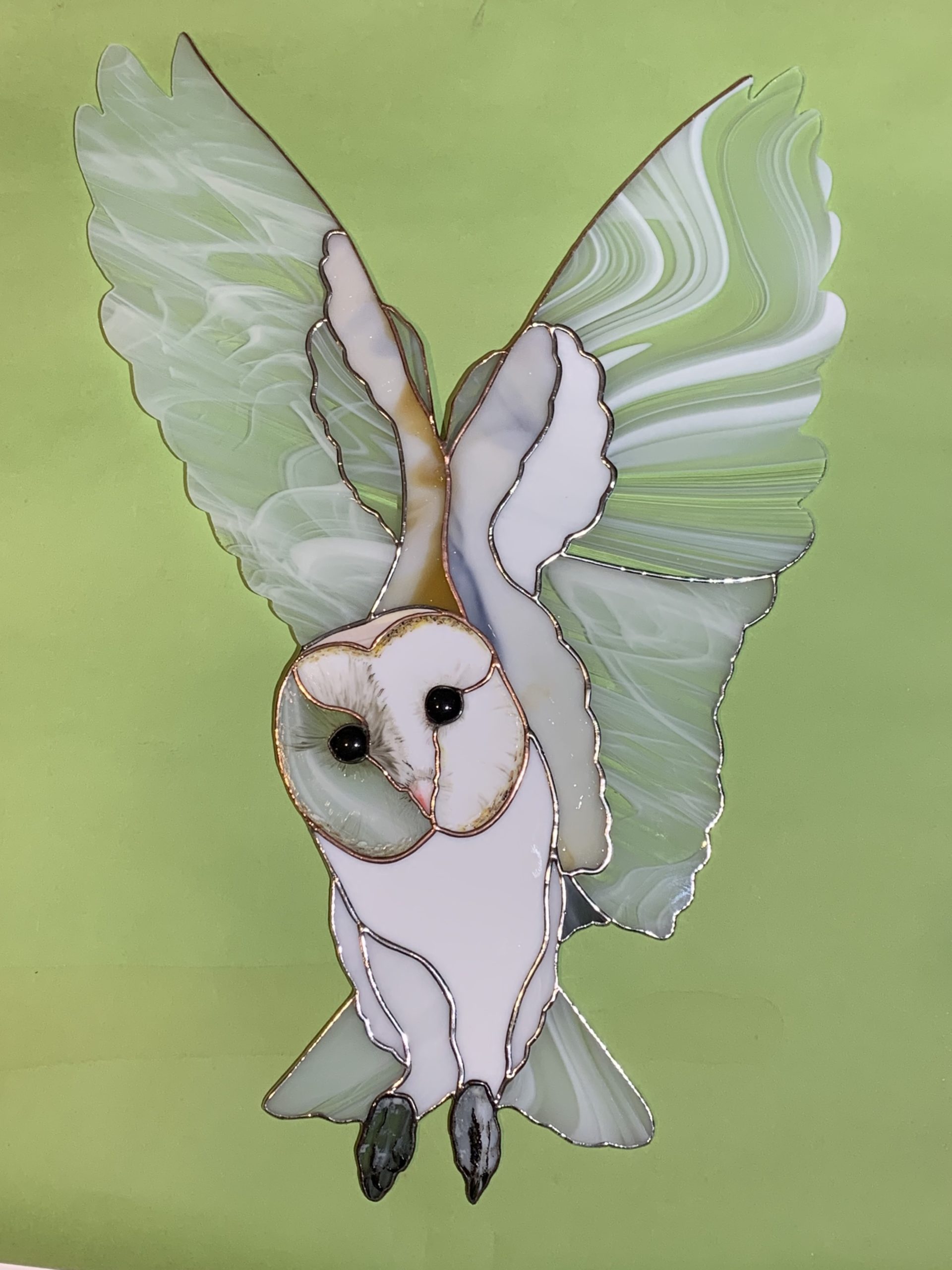 This summer, my Twitter followers had the interesting experience of following the entire process of sketching, planning, cartoon-making (stained glass patterns are called ‘cartoons’), glass selection, cutting and construction of a large 3D open-form shape (the Oystercatcher piece, above). This was only the second 3D piece I had ever made, and I was – and am – inordinately proud of it. The idea for this approach, of ‘floating’ two panels in front of each other, actually came out of a conversation with Harriet Mead, president of the Society of Wildlife Artists (SWLA) at the end of last year’s private view. Harriet knows metalwork, and gave me some constructive critical feedback on the steel stands I used for the diving Gannet piece (‘Under The Surface’) and the Chough. She didn’t like them, and she was right.

So I started thinking. There’s a lot of thinking time in stained glass, especially if you have a penchant for making pieces with a hundred-and-umpteen individual bits to foil. And I thought, ‘what if I could layer panels? How could I make them self-supporting instead of needing stands?’… and while I was thinking about how on earth to do this I came across a glasser making solid abstract forms using narrow glass strips to create curved sides. Revelation! I didn’t want to make vases, but I did, really want to put a Guillemot in it’s proper element, underwater: and I thought this might just be the way. So, for the first time ever, I put one of my birds into a panel – and then made another panel, and filled it with little soldery sandeel, and tried to make it exactly the same size and shape as the first panel. and then I cut out, and ground, and beveled (so they would fit around curves), and foiled 75 narrow strips of glass to link the two panels together. And after a whole lot of thinking and masking tape and five-hands-needed-at-once soldering (and swearing, and wondering how on earth to solder the inside seams of a 3D shape, the Guillemot was right there, chasing sandeels underwater. And I smiled proudly and swore up and down and sideways never, ever, ever to do anything like that again.

Of course, then I looked at the Guillemot in its waterpocket (no, it doesn’t actually hold water!) swimming amongst the sandeels, and I thought ‘but what if I used this idea to suspend flying birds? What if I could put them in their habitat, and maybe use the layers to let them move just a little? What then?’ And it seemed like a great idea, if a bit mad and hard to do. But lovely. So I thought and scribbled, and sat by the estuary watching waders near RSPB Conwy, and a pair of Oystercatchers flew past, calling, and…

Making ‘Y Bioden For’ was difficult in a set of wholly new ways. The birds were enormous fun (I love Oystercatchers), particularly in making apparently simple black-and-white birds textured, and light, and full of movement in the glass. The estuary and saltmarsh and setting is-it-a-sun-or-harvest-moon was technically incredibly demanding, being large complex shapes in a range of difficult glasses (iridescent and in some cases very brittle old glass). And since the two sides are rather different shapes, matching them up in order to solder them onto their sides was… well, I managed in the end. And I was really, REALLY proud of the finished piece, which has such a feeling of light and space about it…

I submitted them both, along with ‘Gwenhwyfar’ the hunting Barn Owl, to SWLA and tried not to think about the selection committee. I suffer horribly with Impostor Syndrome at times like these, and it was Not Improved by submitting such very odd new glass work.

A week later, and none of my pieces made the cut. None.

It seems this year I compounded my art-in-a-medium-traditionally-considered-just-a-craft borderline status by making works that, although built to permit stained glass works to be layered and freestanding, could be considered by the Committee to be ‘decorative vessels or wares’ which SWLA do not accept. My proudly constructed depth-and-transparency-and-perspective ideas were considered, in effect, to be vases.

It is hard, very hard to be rejected. It’s so much more personal to have my art rejected than any scientific rejection I’ve experienced (and it happens all the time, in science. Grant applications, papers, bounce back to you covered in electronic red ink and you wince, and reconsider, and rewrite, and try again. But art, and novel ideas I was really proud of – ouch. More than ouch. Cut off at the knees, bleeding into the dust, perhaps-I-should-give-up-and-stick-with-science pain. It hurts because art is heart’s blood and soul-stuff (and in glasswork, actual real blood and tears!).

But when I started out on this adventure I wanted to make things that people love, and take home, and that make the world a little bit more beautiful. I’ve been sent some lovely messages of support. It wasn’t 24h after the announcement that someone asked to buy the Oystercatchers; and that, in this strange hard world, means a lot to me. It means that someone loves them, as much as I do.